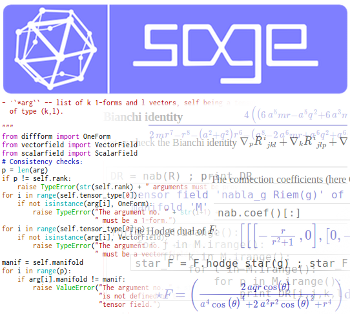 19 September 2022: SageMath 9.7 is out and includes new features regarding manifolds (changelog) (download)

23 June 2022: Introduction to differentiable manifolds in SageMath by Andrzej Chrzeszczyk

The SageManifolds project aims at extending the modern Python-based computer algebra system SageMath towards differential geometry and tensor calculus. All SageManifolds code is included in SageMath, i.e. it does not require any separate installation.

SageManifolds deals with differentiable manifolds of arbitrary dimension. Various coordinate charts and vector frames can be introduced on the manifold, which does not need to be parallelizable. A given tensor field is then described by its sets of components in each vector frame, with automatic change-of-frame transformations for overlapping vector frames.

Generic pseudo-Riemannian manifolds can be considered, among which Riemannian manifolds and Lorentzian manifolds, with applications to General Relativity. In particular, the computation of the Riemann curvature tensor and associated tensors (Ricci, Weyl, Schouten and Cotton tensors) is implemented. SageManifolds can also deal with generic affine connections, not necessarily Levi-Civita ones.

At present (SageMath 9.7), the functionalities include:

As part of SageMath, all SageManifolds code is free and open source; it is released under the GNU General Public License. To download it, see here.

SageManifolds is developed by these authors.

If you want to take part in the project, visit the contribute page, or if you simply want to stay tuned, subscribe to the mailing list.